Providing high-density wireless coverage in these types of large, open venues poses a number of challenges in wireless network design due to the number of uncontrollable variables, including the total number of active wireless clients in the area, the total number online at any one time, the spacing between the clients, and the amount of client roaming throughout the venue.

Traditional thin AP plus controller-based wireless architectures simply do not scale well in high-density environments. Their limited radio capacity (which limits available wireless bandwidth), and their use of omni-directional antennas (which complicates RF design in open spaces) results in many more devices required. As a result, hundreds of thin APs may be required to provide adequate wireless coverage in a high-density venue. This can significantly increase the cost, complexity, and management of the network deployment while limiting overall performance. 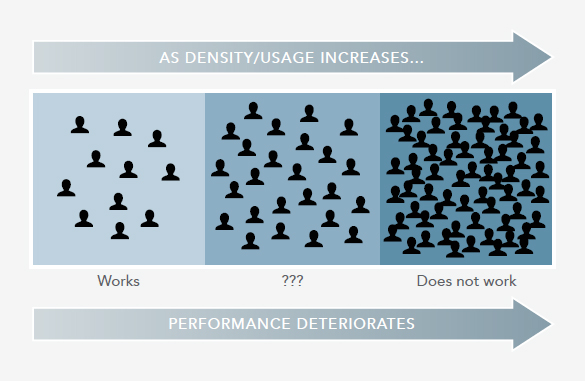 The capacity and throughput requirements of high-density wireless environments demand a more intelligent solution to traditional thin AP networks. A more flexible solution is needed that can scale to support hundreds or thousands of simultaneous users and an ever-increasing range of wireless devices. Xirrus' Wireless Array architecture meets the high-density challenge by providing a powerful suite of capabilities that are specifically geared toward handling high-density wireless:

Xirrus Arrays incorporate from four to sixteen 802.11a/b/g/n radios into a single chassis. Each radio can be configured for either 2.4GHz or 5GHz operation and can run at speeds up to 450 Mbps (the current limitation of 802.11n), providing the maximum amount of flexibility and bandwidth capacity. The use of more spectrum and more radio channels increases network availability. When clients are able to associate to multiple APs operating on separate non-overlapping channels, then simultaneous transmission can occur, thereby increasing overall throughput and system capacity.

Xirrus Arrays are completely modular, allowing seamless upgrades to increase both radio capacity and performance. Up to eight radio modules can be plugged into an XR-4000 chassis and up to 16 radio cards in an XR-6000 series chassis providing multiple Gbps of throughput in a single enclosure. This modularity enables future upgrades to higher performance wireless (e.g., the developing 802.11ac and 802.11ad standards) when available—without a forklift upgrade to the system.

The size of wireless cell coverage area is determined by the transmit power and receive sensitivity of both the AP and the receiving stations. Xirrus Arrays support automatic control of power and sensitivity on a per-radio basis. By automatically tuning these values, the cell size can be adjusted to accommodate the environment and client density requirements. Adequate power control is important to mitigate the interference between radios operating on the same channel between different Arrays.

Balanced distribution of users among radio resources is key for high-density wireless environments. Load balancing spreads clients as evenly as possible among available radios with the goal of providing maximum bandwidth to all stations. Xirrus Arrays automatically load balance clients based on four criteria: clients per radio, client signal strength, wireless band (5GHz is preferred over 2.4GHz), and wireless mode (802.11a/b/g/n). A sophisticated algorithm takes these factors into consideration before allowing a new client to associate to the network. By matching clients with optimal radio resources, performance is optimized.

Traffic shaping allows for the control of traffic flow through the network based on the type and rate of traffic. Wireless is a shared medium, so the ability to handle delay-sensitive traffic, such as voice or video differently, is important. In addition, traffic rate limiting can be configured on the Array per SSID or user group in order to prevent any client or group of clients from consuming an inordinate amount of available bandwidth at the expense of other clients.

Broadcast and multicast traffic can consume a lot of air time capacity on a wireless network if left unchecked. So, minimizing its effect can significantly improve overall network performance. Xirrus Wireless Arrays incorporate stateful filtering and special features such as ARP filtering that reduce the proliferation of broadcast and multicast traffic unnecessarily forwarded across the wireless network.

Spectrum analyzers are useful tools for troubleshooting wireless networks. Devices such as microwave ovens, cordless phones, and Bluetooth devices as well as other nearby wireless networks can cause RF interference and degrade the overall network performance. Every Xirrus Wireless Array supports a radio that can be dedicated to spectrum analysis, packet capture, and threat monitoring. This allows network administrators to monitor and troubleshoot the wireless network and detect existing sources of interference without compromising radio resources available for users.

High-density user environments can push conventional wireless networks beyond their limits, resulting in a negative user experience. This is especially true at live events such as trade shows and conventions where thousands of users may be trying to access the wireless network simultaneously.

Xirrus Wireless Arrays provide the ideal solution to the highdensity wireless networking challenge. Their ability to concentrate up to 16 radios with sectorized, directional antennas into a single device provides a huge capacity advantage over legacy, omnidirectional thin AP solutions. When it comes to high density, capacity matters, and Xirrus provides the highest-capacity, highestperformance wireless solution for high-density environments.

Xirrus Wireless Arrays deliver the capacity and coverage required for high-performance, high-density Wi-Fi environments. Xirrus' modular architecture allows customers to buy to the capacity required today, then scale easily and cost effectively in the future without having to forklift upgrade the network.